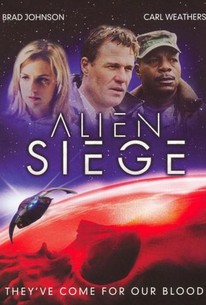 When a highly advanced race of extraterrestrials attempt to hold planet Earth hostage in order to save their own race, one angry father whose daughter has been chosen for sacrifice determines to fight back in this sci-fi thriller starring Brad Johnson and Carl Weathers. An alien race is dying, and in order to survive they need the blood of eight million humans. In order to better persuade the citizens of Earth to make such a substantial "donation," the aliens place a powerful doomsday device over the North Pole. Should humankind refuse to cooperate, the aliens will activate the device and destroy the planet; should they comply, the device will become a power supply source capable of meeting all energy needs for the next three centuries. As countries around the globe prepare to surrender the necessary number of citizens, the United States prepares to deal with the situation by starting a lottery system. Those unfortunate enough to be selected will be immediately liquidized and surrendered to the alien overlords -- at least that was the way it was supposed to go. When scientist Steven Chase learns that his daughter has been singled out for oblation, he chooses not to offer up his only child but to fight back instead. Now, as Steven wages a seemingly futile battle to expose the aliens' weakness and save his daughter's life, the malevolent invaders wreak havoc on the planet by reneging on their plan and harvesting humans at will.

Julian Vergov
as Holland
View All

There are no featured audience reviews for Alien Siege at this time.