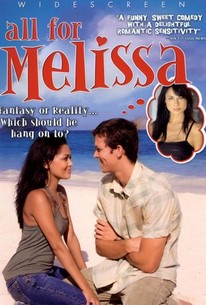 All for Melissa Ratings & Reviews Explanation

An aspiring filmmaker from Hawaii sets out on a quest to win the heart of a high profile Hollywood actress, in the process realizing that is true love has been faithfully by his side all along. Jared Rogers is a twenty-two year old dreamer with an unfulfilling job, a nemesis dedicated to making his life miserable, and a family that doesn't understand him. Recently, Jared has fallen head over heels in love with red-hot Hollywood "It" girl Melissa Williams. At night, when Jared closes his eyes, his dreams are filled with visions of the big screen beauty, and over time his fixation with Melissa makes him an outcast even among his oddball filmmaking friends. The only person who seems to understand him at all is his best friend Alicia, though Jared's too distracted by his fantasies to even take notice. Though Alicia longs for the day that Jared will get over his fantasies and finally recognize that true love is fully within his reach, she reluctantly collaborates on a plan to help him meet the high profile object of his obsession, and the pair quickly begins production on the ultimate fan video. Dejected when Melissa's manager fails to respond, Jared sets his sights on Hollywood, and hatches an ambitious plan to use the media to reach her. When that fails too and Jared returns to Hawaii bitter and angry, Alicia makes the difficult decision to finally give up on him. Later, after an illuminating conversation with his menehune-crazy best friend Brandon, Jared decides to make up with Alicia. Just then, Jared happens across the radiant Melissa as she's taking a peaceful stroll on the beach. What happens next is anyone's guess.

Critic Reviews for All for Melissa

There are no critic reviews yet for All for Melissa. Keep checking Rotten Tomatoes for updates!

Audience Reviews for All for Melissa

There are no featured audience reviews for All for Melissa at this time.

All for Melissa Quotes