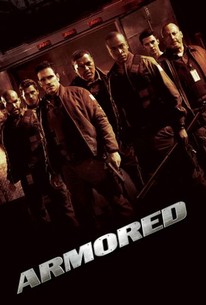 This B-grade thriller has a good cast and director but is undone by plot holes and messy conclusion.

Vacancy director Nimród Antal helms the crime thriller Armored, starring Columbus Short as Ty, an armored truck guard who gets wrapped up in a heist scheme hatched by his godfather and mentor on the job, Mike (Matt Dillon). Along with a team that includes Laurence Fishburne, Jean Reno, and Skeet Ulrich, the group makes off with a shipment of 40 million dollars, but things start to unravel when one of them kills a homeless man as they stash the cash. Ty, who almost didn't sign on to the job but caved when his house was on the verge of foreclosure and his brother nearly taken out of his custody by Child Welfare, breaks from the plan and locks himself in one of the armored trucks until he figures out a way out of the deadly scenario. While Ty is trapped inside the truck with half of the loot, the rest of the crew has only so much time before they're reported missing, bringing life-or-death decisions to a heist where no blood was to be spilled. Things get further complicated when a patrol officer (Milo Ventimiglia) comes snooping around the warehouse district where the crew has been hiding. ~ Jeremy Wheeler, Rovi

Glenn Taranto
as Joe the Cook

Andrew Fiscella
as Dispatcher #1
View All