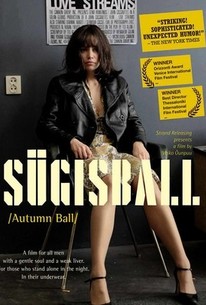 Autumn Ball is a new Estonian film that talks about six inhabitants of Soviet-era tower blocks whose lives touch together, and who are all united by a feeling of loneliness. The young writer, Mati, lurks outside the window of his ex-wife and unsuccessfully approaches other women. August Kask is a bachelor-barber living a drab life who takes to a little girl, but his approaches are misconstrued as pedophilia. The single mom, Laura, watches a sappy soap opera on TV and pushes away men's advances because she cannot trust them. Maurer, the architect, thinks about the wellbeing of humanity, but has forgotten his own wife, who, in turn, looks for solace in the coatroom attendant Theo. Women like Theo, but due to his low social status, they don't take him seriously.Autumn Ball tells a tale of human seclusion and the incapability to reach others. But you also find humor and the absurd, and the properly attuned viewer might even find oneself laughing out loud. If I were to define the film, I would say that Autumn Ball is a pitch black comedy about loneliness, despair and hope. --© Official Site

Iris Persson
as Lotta
View All

There are no featured audience reviews for Autumn Ball (Sügisball) at this time.