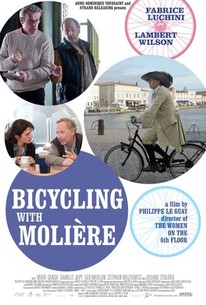 A warm, funny, literate comedy in which two French actors portray two French actors, friends at odds with one another in every possible way, except their love of Molière's The Misanthrope. Lambert Wilson (OF GODS AND MEN) plays Gauthier, tall, handsome, and the beneficiary of a leading role in a ridiculous soap opera as a beloved cosmetic surgeon who "saves lives." Fabrice Luchini (who previously worked with Le Guay in WOMEN ON THE 6TH FLOOR) as Serge has met with much less success, becoming a middle-aged curmudgeon who has renounced the stage to live on the glorious île de Ré, off France's Atlantic coast. Gauthier arrives on Serge's turf to try to convince his pal (Luchini, in real life, a Molière expert) to return to Paris to play opposite him in a new production. When not arguing or rehearsing scenes while biking, they consider their options as personified by a local porn actress and an attractive Italian divorcée, as well as the lure of island real estate. (c) Strand

News & Interviews for Bicycling with Moliere

Critics Consensus: The Other Woman is Short On Laughs
View All

Critic Reviews for Bicycling with Moliere

Audience Reviews for Bicycling with Moliere