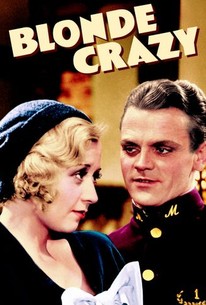 Blonde Crazy is the kind of amoral fun that disappeared from Hollywood after 1933, once the Production Code forced morality down the throats of the studios (and screenwriters) and audiences. James Cagney plays a bellhop -- with a machine-gun mouth and a randy-streak a mile wide -- who turns full-time con man once he meets Joan Blondell, a basically "nice" girl (but not too dedicated to it) who quickly falls into his scheming and scamming ways. Blondell plays the bait in a string of badger game come-ons with a string of "sugar daddies," all of whom deliver their spare cash to duck out of trouble. The two live well on the proceeds of their con game until they come to New York City, where sharpster Louis Calhern tricks Cagney out of their money with a phony counterfeit scam. The pair get even with a suspenseful and elaborate con aimed at him, but Blondell also reveals she's tired of running and scamming people, and the life she's leading. She goes off to marry upper-class stock-broker Ray Milland, who is stuck on her and knows nothing of her past or her work. It's then that Cagney discovers he really loves her, and he ends up giving up his con man life, wandering aimlessly as the world seemingly passes him by. But Blondell comes back after a year of marriage, desperate for help -- it seems her straight-arrow husband has gotten himself into a jam involving embezzlement. It takes Cagney's response, coupled with a double-cross and a police chase, to show her how much he loves her.

Weekly Ketchup: Tom Holland Is the New Spider-Man
View All