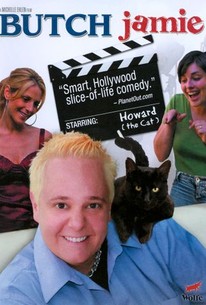 A butch lesbian actress with Hollywood dreams is offered the role of a lifetime after she stops trying to be someone she's not and finally attends an audition as her natural, masculine self. Every actress knows that rejection is just part of the game, but no matter how hard she tries Jamie just can't seem to get a break. Even her roommate Lola's cat is landing more roles than Jamie these days, a fact that causes the dejected actress to finally consider attending an audition sans make-up and press-on nails. Miraculously, the stunt works and Jamie is soon offered a role in a small but promising indie. The only problem is that the part she's been offered is that of a male character named "Steve." Initially indignant at the prospect of playing a man, Jamie quickly gets over her anger just as Lola comes out as a bisexual. As shooting on the film gets underway and Jamie befriends a pretty female cast mate, it doesn't take long for her to realize that the true path to happiness begins when you simply accept yourself for what you really are.

Nathan Edmondson
as Glen
View All

There are no critic reviews yet for Butch Jamie. Keep checking Rotten Tomatoes for updates!

There are no featured audience reviews for Butch Jamie at this time.