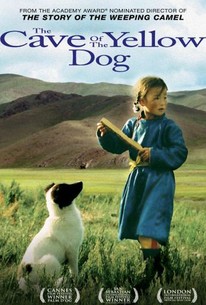 A sparse, hauntingly beautiful journey across continents and cultures.

The Story of the Weeping Camel director Byambasuren Davaa returns to the helm to further explore the bond between man and beast with this tale of a young Mongolian girl who rescues a stray dog, and the subsequent relationship that develops between the homeless canine and the girl's disapproving father. Six-year-old Nansal was in the field collecting dung patties for fuel when she first came across the aimless yellow mutt she took to calling Zochor ("Spot"). Though the amiable mongrel and the girl form an immediate bond, trouble arises when her father insists that it will lead the wolves to the family's sheep, and she must get rid of it immediately. In the weeks that follow Nansal does her best to keep her four-legged friend a secret from her dad, but when winter draws near and the family prepares to migrate to another camp, Zochor is eventually tied to a post by Nansal's father and left behind. Despite the father's insistence that the beast will only bring problems for the family, he is soon compelled to reconsider his stance on the matter when Zochor proves his worth by protecting the youngest member of the family from a flock of hungry vultures.