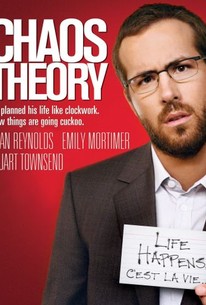 Ryan Reynolds and Emily Mortimer do what they can, but ultimately Chaos Theory is an overly conventional dramedy.

After living his life with clockwork precision, a man throws any and all caution to the wind in this freewheeling comedy drama. Frank Allen (Ryan Reynolds) is a successful motivational speaker and author whose book "The Five-Minute Efficiency Trainer" advises readers that strict organization and avoiding impulsive behavior is the key to success. Frank is married to Susan (Emily Mortimer), who has been his sweetheart since college, but while he's happy, she's beginning to have second thoughts -- she chose to be with Frank rather than his best friend, Buddy (Stuart Townsend), because of his sweet and gentle nature, but his new habit of carefully budgeting every moment of the day has squeezed most of the fun out of their lives. After a quarrel with Susan leaves Frank in a troubled state of mind, he's enthusiastically propositioned by a sexy woman at a self-help seminar (Sarah Chalke), and has to take a pregnant woman (Jocelyne Loewen) to the hospital when he nearly runs her over on the street. Susan learns about Frank's day and comes to the mistaken conclusion that he's been unfaithful to her with both women. Susan leaves him and Frank decides that his hyper-organized life is to blame for the collapse of his marriage. Suddenly, Frank figures it's time to give his id full reign -- he buys a motorcycle, starts fist fights in bars, sleeps with strange women, takes up streaking, and does nearly everything the old Frank would warn him against. ~ Mark Deming, Rovi

Jovanna Huguet
as Maid of Honor

Christina Twidale
as Girl #1 at Bar

Laurie Murdoch
as Judge at Wedding
View All