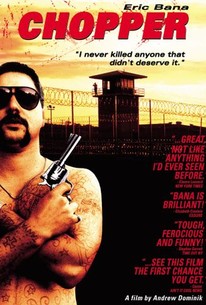 Eric Bana's performance as the charming but twisted Chopper is the highlight of this disturbing portrait about Australia's notorious author/criminal.

What happens when you take the toughest guy you can imagine and make him Australian? He gets even tougher. Mark "Chopper" Read, best-selling author and underworld executioner, is Australia's most infamous and self-promoting criminal. His knack for killing and storytelling set him on an unlikely path toward the fame he has always dreamed of attaining. The film begins in a maximum-security prison, where Chopper's erratic behavior and dishonesty lead his "friend" to stab him repeatedly. Fearing further retribution, he cuts off his ears to obtain a transfer. The story then jumps eight years. Chopper, who's now on the fast track to a place where fact and fiction are increasingly blurred, is released. Filled with resentment and guilt and searching desperately for his hidden enemy, he kills a minor criminal in a fit of paranoia but manages to beat the charge by virtue of his now well-honed fabricating ability. However, he's charged with another offense and returned to jail where he writes an exaggerated account of his life of crime.

Serge Liistro
as Sammy the Turk

Johnnie Targhan
as Paul the Bouncer

Gregory Pitt
as Prison Officer No. 1

Richard Sutherland
as Prison Officer No. 2

Andrew Dunn
as Prison Officer No. 3

Alan Close
as Medical Officer No. 1