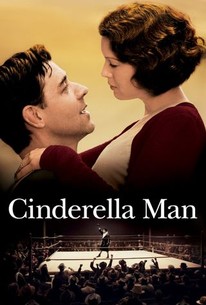 With grittiness and an evocative sense of time and place, Cinderella Man is a powerful underdog story. And Ron Howard and Russell Crowe prove to be a solid combination.

The true story of an athlete who achieved his greatest success against the most daunting odds of his life is brought to the screen in this historical drama. In the 1920s, James Braddock (Russell Crowe) from Bergen, NJ, was a promising contender in professional boxing; he had strength, spirit, and tenacity, but the combination of a serious hand injury and a 1929 defeat in a bout with light heavyweight champ Tommy Loughran sent his career into a serious tailspin. As Braddock's career in the ring dried up, the Great Depression put a stake through the heart of America's economy, and Braddock found himself working at the New York docks for pitiful wages as he tried to support his wife, Mae (Renée Zellweger), and three children. Desperate for money, Braddock turned to his former trainer and manager Joe Gould (Paul Giamatti), who was unexpectedly able to scare up a bout for him, battling John Griffin at Madison Square Garden. While conventional wisdom had it that Braddock was too old, out of shape, and out of practice to have any chance of winning, he defeated Griffin, and continued beating his opponents with a powerful left hook that had been intensified by years of punishing dock work. In a nation desperate for good news, Braddock's surprising comeback became a tonic to struggling workers and unemployed people, and all eyes were on Braddock when in 1935 he took on powerful heavyweight champion Max Baer (Craig Bierko) in what was both literally and figuratively the fight of his life. ~ Mark Deming, Rovi

Angelo Dundee
as Angelo the Cornerman
View All