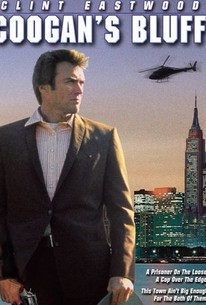 Clint Eastwood stars as Walt Coogan, an Arizona deputy sheriff who has been sent to New York City to extradite escaped killer James Ringerman (Don Stroud). On arrival, he's forced to wait by NYPD detective Lieutenant McElroy (Lee J. Cobb), who informs him that Ringerman is recovering from a bad acid trip at Bellevue Hospital. After briefly flirting with attractive probation officer Julie Roth (Susan Clark), Coogan heads for Bellevue, where he's able to con the hospital's staff into releasing the criminal. The cop and the fugitive are on the way to catch a flight back to Arizona, when Ringerman's hippie girlfriend Linny (Tisha Sterling) and a large accomplice spirit the killer away, leaving Coogan unconscious. Luckily, Julie is the girl's probation officer, and Coogan manages to get her address from the woman's files while getting to know her better. He tracks the girl to a popular psychedelic club, whereupon, deciding she likes the deputy, she takes him back to her apartment for further interrogation. The first in a series of films on which Eastwood would collaborate with director Don Siegel, it features a memorable scene in which a battle fought with billiard balls and cue sticks suggests the birth of a new martial art. Although its seemingly innocuous scenes of sex and violence drew criticism at the time, it served as the source for television's considerably more benign McCloud, starring Dennis Weaver as the laconic fish out of water.