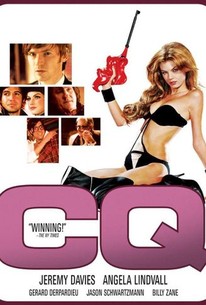 CQ is a stylish and fun homage to campy 1960s flicks.

The feature debut of Roman Coppola (son of Oscar-winning director Francis Ford Coppola) centers around an international film crew making a low-budget, Barbarella-like feature in Paris in 1969. The film is called Dragonfly and is being directed by Andrzej (Gérard Depardieu), who wishes to make a revolutionary work rather than the tacky fluff it is becoming. He is soon fired by the film's Italian producer Enzo (Giancarlo Giannini) when he can't produce a satisfactory climactic scene. After briefly replacing Andrzej with an American horrormeister named Felix DeMarco (Jason Schwartzman), the film's editor and second-unit director, the job is finally handed to Paul (Jeremy Davies). Paul is pleased with the offer, but more devoted to his 16 mm filming of his diary of daily life. He eventually begins to fall for the leading lady (Angela Lindvall), but must retrieve footage of the feature stolen by Andrezej and try to keep the troubled production together. CQ features Billy Zane, Massimo Ghini, and Dean Stockwell in supporting roles.

John Phillip Law
as The Chairman

Les Woodhall
as Board Member

Jean-Baptiste Kemer
as Board Member

Caroline Colombini
as Girl in Miniskirt

Ross Pianeta
as Woman in Flat