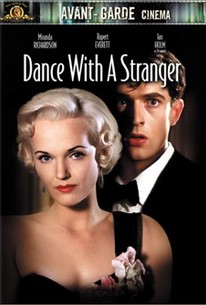 Dance with a Stranger

This darkly haunting slightly fictionalized film is a retelling of the life and death of Ruth Ellis (Miranda Richardson), the last woman to be executed in England. Ellis, a divorcee and ex-prostitute works as a "hostess" in a tacky nightclub. There she meets and begins an obsessive love affair with upper-class David Blakely (Rupert Everett), who eventually discards her. Still obsessed and jealous because of David's upcoming marriage to a woman of his own class, Ellis murders him. Miranda Richardson, in a stark, knock-out performance is outstanding as the cold, calculating Ellis, unscrupulous in her use of everyone to get what she wants. Ian Holm, in an often-overlooked performance, is superb as the man who loves Ellis, supporting her and her teenage son, without ever gaining her love. He is her mainstay and the surrogate father to her teenage son, who Ellis has little time for. In his own, quiet way he is as obsessed as Ellis. The screenplay, adapted by Shelagh Delaney remains faithful to the true story, taking only minor dramatic license. Dance With a Stranger is an uncompromising look at obsessive love and its consequences on others. The story is made even more poignant because of the sad life and eventual suicide of Ellis' real son.

Lizzie McKenzie
as Woman in Launderette

Alan Thompson
as Ralph
View All

Critic Reviews for Dance with a Stranger

Audience Reviews for Dance with a Stranger

Dance with a Stranger Quotes