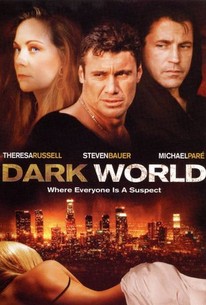 In the tradition of Alfred Hitchcock comes this neo-noir, murder-mystery thriller concerning a jaded LAPD detective attempting to solve a series of perplexing missing-person cases. Harry Boyd (Michael Paré) is in a tight jam; not only is he recovering from a serious injury, but should he fail in apprehending the culprit responsible for terrorizing the city, he may well lose his job. Meanwhile, as Harry walks a careful line with his loudmouth, lowbrow partner Bob (Charles Arthur Berg), he receives a disturbing piece of news: His ex-wife's teenage niece Grace (Jen Graham) has gone missing, apparently the victim of the kidnapper who haunts the city shadows. Later, Harry's ex-wife Nicole (Theresa Russell draws suspicion by returning from Las Vegas with shady new boyfriend Rick (Steven Bauer) and displaying some seriously bizarre conduct as the pair begins their own investigation. As Grace's drunken, short fused father Charlie (James Russo) become a prime suspect in the case, Harry attempts to gather evidence while resisting the advances of Bob's overly persistent, ex-stripper wife Zoey (Julie St. Clair), who longs to seduce her husband's partner, and refuses to take no for an answer.

There are no critic reviews yet for Dark World. Keep checking Rotten Tomatoes for updates!

There are no featured audience reviews for Dark World at this time.