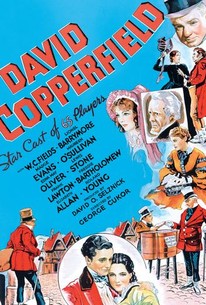 David Copperfield was MGM's major Christmas release for its 1934-1935 season and also the first of producer David O. Selznick's major "literary" films for that studio. While a great deal of editing and streamlining was necessary to distill Charles Dickens' massive novel into 133 minutes of screen time, the end result was so successful that only the nittiest of nitpickers complained about the excised characters and events. Freddie Bartholomew plays the young Copperfield, who, after the death of his mother (Elizabeth Allan), is cruelly mistreated by his stepfather, Mr. Murdstone (Basil Rathbone). David's life brightens when he meets the ever-in-debt Mr. Micawber (W.C. Fields), and he is sheltered by Micawber's large and loving family until Micawber is carted off to debtor's prison. Forced once more to seek a home, David makes his way to the Dover estate of his Aunt Betsey (Edna May Oliver), where he meets another colorful cast of characters, none more so than the childlike Mr. Dick (Lennox Pawle). When Murdstone arrives, insisting that David be returned to him, Aunt Betsey and Mr. Dick form a united front to protect the boy. Flash-forward several years: the grown David (now played by Frank Lawton) is attending school, where he meets the lovely Agnes Wickfield (Madge Evans). David discovers that Agnes' businessman father (Lewis Stone) is under the thumb of the "'umble" prevaricator Uriah Heep (Roland Young) and the equally disreputable Steerforth (Hugh Williams). With the help of Mr. Micawber-who in a weak moment has taken a job working side-by-side with Heep-David proves Heep's treachery and rescues the Wickfields. By rights, he should marry Agnes, but David impulsively weds the empty-headed Dora (Maureen O'Sullivan). Only after Dora's death does David come to his senses, realizing that Agnes is the true love of his life. Originally, Charles Laughton was slated to play Micawber, but he pulled out of the production, worried that he wouldn't be funny enough. The casting of W.C. Fields was an inspired choice: although he injects his own established screen personality at every opportunity, Fields was born to play Micawber. Likewise, second-billed Lionel Barrymore fits his portrayal of crusty old Dan Peggoty like a glove. In fact, there isn't a false bit of casting in the whole production, and this, as much as Selznick's sumptuous production values, is the key to David Copperfield's enormous success.

Hugh Walpole
as The Vicar

Marilyn Knowlden
as Agnes as Child

Margaret Seddon
as Bit
View All