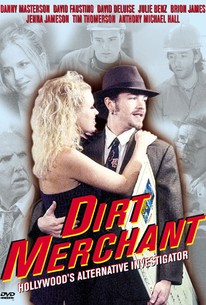 A slow-witted young man turns gumshoe to keep himself out of jail in this comedy. Kurt Merchant (Danny Masterson), known to his friends as "Dirt," loses his mailroom job at a record label and is forced to throw himself into the shallow end of the job market. Dirt ends up getting a position delivering summons papers, and he's excited when he's instructed to give a "notice to appear" to Johnny Decay (Wade Carpenter), a well-known rock star. However, when Dirt arrives at Johnny's home, Johnny has just overdosed on drugs for the last time, and when the police arrive to find Dirt on the premises, he becomes a murder suspect. In order to save his own skin, Dirt must become an overnight detective. Dirt Merchant (which was first screened under the longer title Dirt Merchant, Alternative Investigator, as well as My Name Is Dirt) also stars David Faustino, Julie Benz, David DeLuise, Brion James, and Jenna Jameson.

Jenna Jameson
as Holly So Tightly

Tim Thomerson
as Jack
View All

There are no critic reviews yet for Dirt Merchant. Keep checking Rotten Tomatoes for updates!

There are no featured audience reviews for Dirt Merchant at this time.