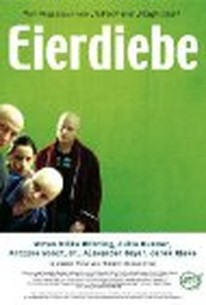 A man who loses a very personal part of his body to cancer decides he wants it back in this offbeat black comedy. Martin Schwarz (Wotan Wilke Moehring) is a young man who has returned to Berlin after receiving a graduate degree in the United States. Short on both work and funds, Martin is alarmed by a constant pain in his groin, but doesn't want to spend the money to go to a doctor; a friend persuades a local paramedic to look at Martin, who insists he visit a hospital as soon as possible. The bad news for Martin is he's suffering from testicular cancer, which means one of his testes will have to be removed. While in the hospital, Martin meets Susanne (Julia Hummer), a beautiful patient who is carefully swiping drugs from the clinic for her own purposes. After surgery, Martin is told that he should have his other testicle removed to prevent a possible spread of the cancer. Put off by this notion, Martin instead opts for chemotherapy, and ends up in a ward with two eccentric cancer patients, Harry (Antoine Monot Jr.) and Nickel (Janek Rieke). One especially odd conversation between the three ends with Martin taking a bet that he can successfully recover his cancerous testicle from the hospital's pathology lab, a task he soon learns is far harder than he expected. Meanwhile, Martin and Susanne fall into a relationship, but she becomes increasingly upset by his inability to accept the notion that both of them may be living on borrowed time. ~ Mark Deming, Rovi

There are no critic reviews yet for Eierdiebe (The Family Jewels). Keep checking Rotten Tomatoes for updates!

There are no featured audience reviews for Eierdiebe (The Family Jewels) at this time.