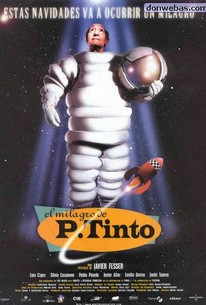 El Milagro de P. Tinto is the first full-length film of Madrid-born Javier Fesser, whose career behind the camera had previously been in advertising. The story, which follows the saga of an ordinary Catholic family, appears to be very conventional: Young P. Tinto wants to be the father of a large family when he grows up. He dreams of having a bunch of healthy kids as soon as he finds himself a woman. Fifteen years later, we find him living with blind Olivia in a valley off the beaten track where the express train for the North has stopped only once in the last five years. Time passes, but the children he has dreamed of do not arrive. Fifty years later, when the couple has given up all hope, a miracle takes place, the 'miracle' alluded to in the title of the film, which will make possible the continuation of the Tinto family from one generation to the next. But the new arrival is not only a long time coming but also appears to be from a highly unusual source. In the final analysis, this family portrait is anything but conventional. Javier Fesser uses offbeat set designs borrowed from comic strips and cartoons as he concocts a fantastic and entertaining cocktail of social satire and surreal comedy reminiscent of Theo Van Dormael's Toto the Hero. The film received a Special Mention from the jury at the 1999 Locarno International Film Festival for its style, humor, and originality. ~ Gönül Dönmez-Colin, Rovi

Giozalde Nunez
as Olivia as a young woman
View All

There are no critic reviews yet for El Milagro de P. Tinto (The Miracle of P. Tinto). Keep checking Rotten Tomatoes for updates!

There are no featured audience reviews for El Milagro de P. Tinto (The Miracle of P. Tinto) at this time.