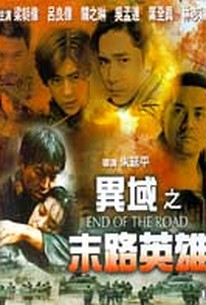 End of the Road

End of the Road Photos

Following his 1990 bid for a more serious sort of filmmaking with A Home Too Far, Taiwanese exploitation director Chu Yen-ping continued the war story which that film began with this stirring appeal to Nationalist sentiment. The Nationalists are preparing to disarm as the story begins, under heavy pressure from the Burmese military. The army raids their camp anyway, killing several of them and causing some others to defect and flee to the mountains for refuge. Most of these men end up fighting for other non-partisan causes, including those who raid military camps for ill-gotten profit. Those who stay behind to fight the Communists end up joining forces with the Thai military. One of the soldiers, Ke Bao-den (Tou Chung Hua), is particularly distraught to hear that the joint force will first do battle with the army of the bandit Lo Huei (Ray Lui), because some of the Nationalist defectors are part of his force, including Bao-den's friend Fan Long (played by popular actor Tony Leung). Fan Long had saved Bao-den's life in a Burmese prison camp, so the soldier decides to return the favor, undertaking a traitorous and potentially fatal mission to warn his friend about the planned attack. Ng Man-tat leads a talented supporting cast including Ko Chuen-hsiang, Yeh Chuan-chen, and veteran actress Rosamund Kwan. ~ Robert Firsching, Rovi

Critic Reviews for End of the Road

There are no critic reviews yet for End of the Road. Keep checking Rotten Tomatoes for updates!

Audience Reviews for End of the Road

There are no featured audience reviews for End of the Road at this time.

End of the Road Quotes