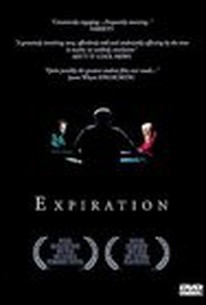 A young Canadian couple takes a walk on the wild side in writer/director Gavin Heffernan's feature debut, Expiration, which was shot on video over 29 months. Niki (Erin Simkin) tells her old pal Sam (Heffernan) that she's pregnant, and that he, and not her current slacker boyfriend, is the father. Sam takes his mother's engagement ring (Dad ran off when he was a child) and invites Niki out for a romantic evening in Montreal, planning to ask her to marry him. But at dinner, he loses his nerve. The couple gets lost on the drive home, and they end up in a dicey neighborhood. Niki has a bout of morning sickness, prompting Sam to leave her resting in the car while he runs into a nearby convenience store. Meanwhile, Rachel (Janet Lane), a small-time drug dealer on an important run, is in the same store buying some licorice. A desperate young man, Oliver (Laen Hershler), barges in and robs the place, taking Sam's ring and Rachel's drugs, and the two reluctantly team up to track Oliver down. While they encounter a lesbian wedding, desperate druggies playing their own version of Russian roulette, and a suicidal businessman, Niki has her own adventure, wandering into a nearby park. There, she's attacked, and Julia (Denise DePass), a prostitute, comes to her aid. Julia offers her a ride to her motel, but gets sidetracked. Niki ends up spending time with Julia's troubled teenage daughter, Naomi (Yetide Badaki). The strange and dangerous experiences of the night force both Sam and Niki to reassess their plans for the future. ~ Josh Ralske, Rovi

There are no featured audience reviews for Expiration at this time.