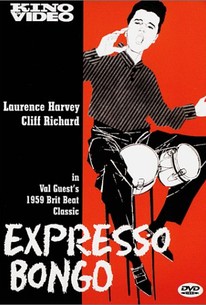 In this witty music-business satire, Johnny Jackson (Laurence Harvey) is a talent agent down on his luck who thinks his tide may have turned when he spots a teenage rock & roll fan wailing away in a coffeehouse. Dubbing him "Bongo Herbert" (Cliff Richard, in a role the now knighted and born-again pop icon would probably prefer to forget), Johnny puts Herbert on the fast track to teenage stardom, using his record company and radio connections to make Herbert's first single a smash hit. Johnny then decides that a little image modification might make Herbert a bigger draw, so his follow-up is a treacly, inspirational tune, "The Shrine on the Second Floor," which hardly gibes with Herbert's newfound fondness for strippers and love-starved American actresses. But just when Johnny thinks he has a meal ticket for life, it's discovered that Herbert is really a minor, making his contract with Johnny null and void. Cliff Richard was at the height of his first wave of popularity as "The British Elvis" when Expresso Bongo was released, leading to a great deal of speculation about how closely it mirrored his own career (the answer probably is: not very much).

Gilbert Harding
as Himself