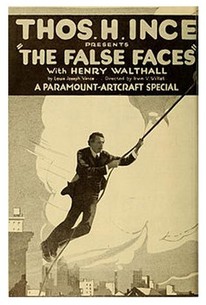 This is yet another picture claiming to be something other than a war film in the days immediately post-World War I. Its makers preferred to think of it as a "spy melodrama" since interest in the war was decreasing practically by the hour. False Faces began life as a story in the Saturday Evening Post and then was a stage play by Louis Joseph Vance. The plot runs thusly: Michael Lanyard, otherwise known as "the Lone Wolf" (Henry B. Walthall), is a reformed badman who has joined the Allied Secret Service. He carries a grudge against a certain German spy, Karl Eckstrom (Lon Chaney, pre-grotesque make-up), who was responsible for the death of Lanyard's wife and child during the German march through northern France. Eckstrom has some important secrets in his possession, so Lanyard follows him on a ship to America. While sailing, he meets Cecilia Brooks (Mary Anderson). She also belongs to the Allied Secret Service, but doesn't let on. After many intrigues and adventures involving the usual "important documents," being thrown overboard and sinking a German submarine, Lanyard wins Cecilia's hard and makes sure Eckstrom gets his just desserts.

Henry B. Walthall
as Michael Lanyard

There are no critic reviews yet for False Faces. Keep checking Rotten Tomatoes for updates!

There are no featured audience reviews for False Faces at this time.