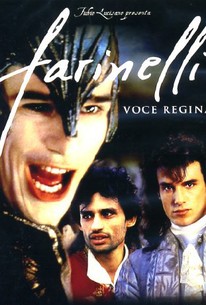 This lavishly produced European costume melodrama chronicles the life of Farinelli the 18th century's most renowned castrati singer whose remarkable voice covered 3 1/2 octaves. He could also sing a continuous series of 250 notes and hold a note for a full 60 seconds. The songs he sang were so complex that no one has been able to sing them since. To recreate his voice, the voices of counter-tenor Derek Lee Ragin and soprano Ewa Mallas Godlewska were combined and digitally enhanced. When Farinelli was just a choirboy, he witnessed the suicide of a fellow member who warned him not to let the masters castrate him. But Farinelli, then Carlo Broschi, had no choice. His father told him he could only sing the songs of his brother Ricardo, a composer noted for his complex and flamboyant songs. The brothers are exceptionally close and even share sexual experiences with women. But when they encountered Handel obstacles arose. In London two theaters were at war. One theater belonged to Handel, the other to his former voice teacher. Farinelli sings at the latter and is quite successful, but he then decides to earn Handel's respect and sing less florid music. He breaks from his brother, sings Handel's songs and becomes recognized as a true artist.

Graham Valentine
as The Prince of Wales

Pier Paolo Capponi
as The Father

Delphine Zentout
as The Young Admirer