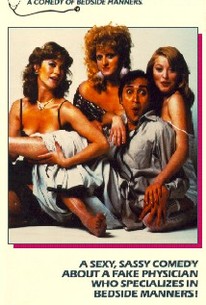 Victor Banerjee, the India-born star of David Lean's A Passage to India, is the central figure of director Ronald L. Neame's Foreign Body. Jobless in Calcutta, Banerjee steals money from his own father to afford passage to Britain. There he makes contact with his cousin Warren Mitchell, who arranges for Banerjee to get a job as a bus conductor. But when he begins to ardently pursue a lovely young white woman, Banerjee loses his job at the behest of the girl's influential father. His luck changes radically when Banerjee administers mouth-to-mouth resuscitation on a bus accident victim, whereupon he is mistaken for a doctor by friendly model Amanda Donohoe (probably the nicest she's ever been on film). Donohoe talks up the skills of this "new Indian doctor", and before he knows what has hit him, Banerjee is head physician to the Prime Minister of England--with virtually every woman in the land vying for his services in bed! Never letting on where it is heading next, Foreign Body is adapted from an equally tricky novel by Roderick Mann.

Neville Phillips
as Customer in Toilet

There are no critic reviews yet for Foreign Body. Keep checking Rotten Tomatoes for updates!

There are no featured audience reviews for Foreign Body at this time.