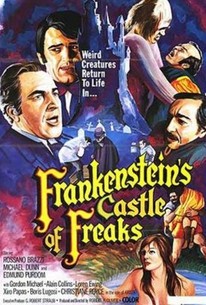 Another horrible horror from Italy, which undoubtedly marked the absolute nadir of Rossano Brazzi's career in the wake of South Pacific. Brazzi plays the deranged Dr. Frankenstein (the credits list him as a Count -- someone must have gotten their monsters mixed) who, like many Frankensteins of yore, endeavors to build an enormous humanoid monster; this one has been given the more biblical name "Goliath." Again, as is the case with so many of his mad-doc brethren, Frank has failed to plan ahead and secure a proper brain for the creature's empty cranium (finding one for the director might have been a better idea). He assigns this task to his somewhat less-than-competent servants, including a dwarf named Genz (Michael Dunn). Believe it or not, the operation does not come off as smoothly as planned, and Genz is exiled from the castle. Miffed, the disgruntled fellow plots revenge against his ex-boss, enlisting the aid of a Neanderthal man named "Ook" (credited under the quaint pseudonym "Boris Lugosi"), who likes to wear jogging shorts. None of this really makes any sense, as it serves only as a vehicle for abundant female nudity and plentiful gore. Also known as House of Freaks and released to video as Frankenstein's Castle of Freaks.

Michael Dunn (I)
as Genz