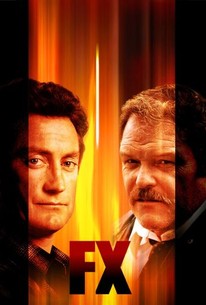 Smart, twisty, and perfectly cast, the effects-assisted neo-noir F/X reminds viewers that a well-told story is the most special effect of all.

A man who simulates death for a living finds himself unwittingly tied into the real thing in this New York-based suspense drama. Special-effects man Rollie Tyler (Bryan Brown) makes his living simulating gory mayhem and photogenic violence for movies such as "I Dismember Mama." Tyler is given a chance to expand his professional horizons when he's approached by Lipton (Cliff De Young), who introduces himself as an FBI agent and makes an unusual proposal. Mob kingpin Nicholas DeFranco (Jerry Orbach) is willing to testify against his fellow gangsters, but the investigators are worried about his safety. Lipton wants Tyler to help him and his staff fake DeFranco's assassination; if everyone is convinced DeFranco is dead, people will be a lot less likely to look for him. Tyler grudgingly takes the assignment, and while he's able to realistically simulate DeFranco being shot in a crowded restaurant, after the "gag," he discovers that he's been double-crossed, and he's wanted for the murder of the man he just "shot." Tyler hides out with his girlfriend, Ellen (Diane Venora), but he realizes that whoever set him up wants him dead after she's killed by a bullet meant for him. With the help of fellow effects artist Andy (Martha Gehman), Tyler goes underground and tries to unravel the truth behind the Lipton murder. Meanwhile, police detective Leo McCarthy (Brian Dennehy) is convinced that something is not right when he's called to the scene of DeFranco's murder and is certain that the dead body is not the gangster. F/X was followed by a sequel, and later a short-lived TV series.

John Doumanian
as The Director

Gerald Campbell
as Doctor
View All