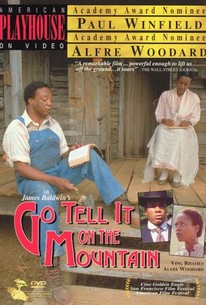 Go Tell It on the Mountain

Go Tell It on the Mountain Ratings & Reviews Explanation

Go Tell It on the Mountain Photos

In this poignant adaptation of James Baldwin's novel about a few generations in the life of an Afro-American family, a young boy's efforts to gain some approval from his Bible-thumping, disciplinarian father takes center stage, and the family's background is told in a series of flashbacks. The story begins in 1935 with young Southerner Gabriel Grimes (Paul Winfield) as he runs away from home and takes on the identity of a Baptist lay preacher. Childless by his timid first wife, Gabriel has an illegitimate son by Esther (Alfre Woodard), an irresistible temptress. Unfortunately, the son comes to no good, forcing an embittered Gabriel to move to Harlem and start over with another wife, and eventually, two more sons. But the man has by this time gone over the edge and is filled with a rage against the vicissitudes of his life (he cannot get ahead in the church and is forced to work as a day laborer just to keep food on the table). He takes out his anger on his family and is so single-mindedly fanatical about religion that he forces his sons to join regular home Bible study to the exclusion of all other activities -- especially those promoted by the white-dominated society outside of Harlem. When his timid but intelligent son John (James Bond III) wins a writing honor, Gabriel makes him give it back -- and in general, his fanaticism and anger turn life into intermittent misery for the talented and sensitive son who loves writing. John's desire to please his father is all the more touching when the impossibility of pleasing him is so obvious.

CCH Pounder
as Deborah
View All

Critic Reviews for Go Tell It on the Mountain

Audience Reviews for Go Tell It on the Mountain

There are no featured audience reviews for Go Tell It on the Mountain at this time.

Go Tell It on the Mountain Quotes