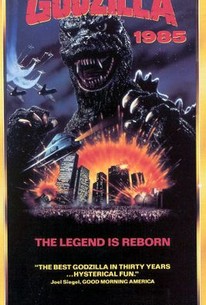 Ever since the 400-foot Japanese lizard-monster Gojira -- translated to Godzilla and great box-office success in the Western world -- first stomped across buildings on the silver screen, there have been remakes and new makes of the monster's story. The most intriguing title may yet be Godzilla Meets the Mona Lisa (also 1985). This 1985 release by Koji Hashimoto resuscitates the monster who is first seen wreaking havoc off the coast of Japan when it downs a ship leaving only one survivor to tell the tale (Shin Takuma). Who should come along in the nick of time but a young newspaper reporter (Ken Tanaka), and the two of them make it onto dry land with a mission to warn the nation that danger lies off-shore. Similar to the original film, other dangers are brought forward when Godzilla accidentally sets off a nuclear disaster and the heads of state have to meet to decide what to do. The heroes busy themselves with saving the world, as Godzilla crunches Tokyo down to ground level. Neither campy and covertly political like its venerable ancestor, nor hip and inventive like many modern "monster" films, this Godzilla is a weaker manifestation of his first appearance on the world's screens.