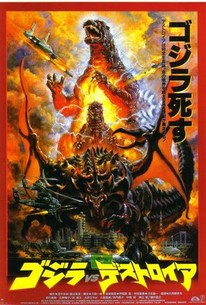 Everybody's favorite Tokyo-trashing mutant lizard strikes again. This go-around features not only the big guy, but also his Scrappy-Doo-like companion, Godzilla Junior. On the human side, the film features a teenaged wunderkind whose father not only narrowly survived the green monster's first attack in 1954, but who also studied under famed 300-story mutant expert Dr. Yamane (who was played by Takashi Shimura in the original film). While the nuclear reactor in Godzilla's bowels (don't ask) slides perilously towards meltdown, giving him an unhealthy glow, a nefarious creature from the deep called the Oxygen Destroyer suddenly awakens from a 2.5 billion-year slumber. Soon the two are grappling in Tokyo Bay, taking out much of Yokohama's gleaming new seaside development in the process. Meanwhile, Japanese Self Defense Force unveils the ultra-high-tech Super X III, a massive flying tank-like affair featuring a top-secret freeze-ray designed to rub out city-stomping mutants. Facing competition from Hollywood, Toho Studios announced that this film would be the last installment of the series. That is until Roland Emmerich's awful Godzilla reached Japanese shores. The outrage of this inferior American import proved to be so great that Toho quickly resuscitated the series with Godzilla 2000. ~ Jonathan Crow, Rovi

News & Interviews for Godzilla Vs. Destoroyah

Critic Reviews for Godzilla Vs. Destoroyah

Audience Reviews for Godzilla Vs. Destoroyah

There are no featured audience reviews for Godzilla Vs. Destoroyah at this time.