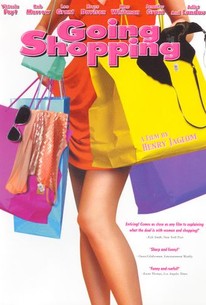 Much like a bad trip to the mall, Going Shopping starts out fun but eventually degenerates into a shallow and unsatisfying experience.

Director Henry Jaglom once again casts his quirky gaze on a common female obsession in this comedy drama. Holly (Victoria Foyt) owns a small and upscale boutique in Santa Monica, and has just learned that her accountant and significant other, Adam (Bruce Davison), has betrayed her -- even worse than cheating on her, he's run off with three month's worth of rent, and she has only a few days to raise the money or lose her space. With Mother's Day approaching, Holly is hoping for a big weekend to save the day, but she has other problems to contend with as she has to patch up a misunderstanding with her mother (Lee Grant), who offers to refer her to a loan shark, and her daughter (Mae Whitman). Meanwhile, with Adam out of the picture, Holly finds herself flirting with Miles (Rob Morrow), the long-suffering boyfriend of one of her customers. And in the midst of the buying frenzy, many of Holly's customers share their feelings about shopping and the role it plays in their lives. Leading lady Victoria Foyt co-authored the screenplay with director Jaglom (who is also her husband).

There are no featured audience reviews for Going Shopping at this time.