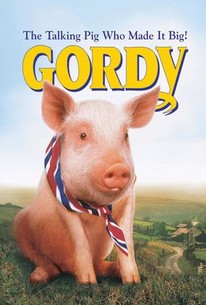 The friendship between a boy and a talking piglet forms the basis of this barnyard comedy. Gordy is the little porker who lives happily on a farm until the farmer goes bust and must sell everything, including Gordy's large family. When the wranglers come to load the pigs onto the truck, Gordy manages to escape. So begins his journey across the South as he searches for his doomed parents. The plucky pig finds a friend when he saves the life of a drowning boy, Hanky Royce, the heir to his grandfather's giant corporation. When grandpa dies, Hanky become CEO, but cannot actually take over until he becomes an adult, so all control is turned over to Gordy. Naturally, avaricious corporate villains oppose him, and even try to kill the precocious pig, who, along with Hanky, continues trying to find his parents before they are ground into sausage. In addition to popular C&W music star Doug Stone, who plays a major role, other country stars also make cameo appearances, including Boxcar Willie, Jim Stafford, Moe Band, and Roy Clark. ~ Sandra Brennan, Rovi

Roy Clark
as Himself

Moe Brandy
as Himself

Mickey Gilley
as Himself

Jim Stafford
as Himself

Boxcar Willie
as Himself

Buck Trent
as Himself

Cristy Lane
as Herself
View All