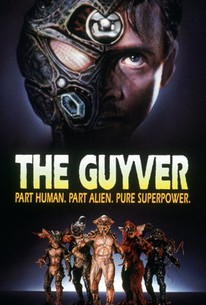 Based on the Japanese comic-book character created by Toshiki Takaya, this hyper-kinetic science fiction fantasy plays like a live-action cartoon. The title initially refers to a mysterious piece of technology capable of generating a powerful bio-mechanical exoskeleton around the body of its operator. After scientist Tetsu Segawa (Greg Paik) is murdered while trying to deliver it to CIA agent Max Reed (Mark Hamill), the device is stumbled upon by Sean Barker (Jack Armstrong), a friend of the scientist's daughter Mizki (Vivian Wu). Sean discovers the object's power when it encases him with protective power-armor during a fight -- armor which comes in handy when the similarly-clad minions of the diabolical Chronos Corporation come after him to reclaim it. The technology they employ is revealed to be from another planet, which has enabled the head of Chronos (David Gale) to transform his henchmen into reptilian creatures known as Zoanoids (whose ranks include Jimmie Walker from the '70s TV sitcom Good Times!). In the ensuing battle, Sean's consciousness becomes merged with the power of the Guyver, bestowing him with remarkable strength and agility, as well as the convenient ability to regenerate himself when damaged. Helmed by Kung Fu Rascals creator Steve Wang and special-effects wizard Screaming Mad George, The Guyver is a colorful but ultimately clumsy comic-book adventure, bogged down by a pedestrian "Hollywood" script that seems out-of-lace amid the exotic premise and fanciful creature designs. Apparently targeted at younger audiences -- who may enjoy the broad comedy and wild monster effects -- this is relatively safe sci-fi fare compared to its ultra-violent source material. Look for "Scream Queen" Linnea Quigley in a brief cameo.

Critic Reviews for The Guyver

Audience Reviews for The Guyver