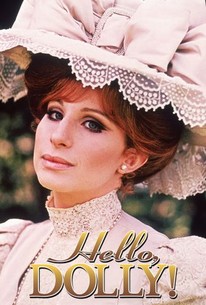 Twenty-seven-year-old Barbra Streisand seemed an inappropriate choice for middle-aged, match-making widow Dolly Levi, but her energy carries her right through the role and dominates the lackluster movie around her. The plot, drawn from Thornton Wilder's The Matchmaker (itself based on a 19th-century British farce), is set in motion when Yonkers feed store clerk Cornelius Hackl (Michael Crawford) celebrates his promotion by taking his pal Barnaby Tucker (Danny Lockin) to New York City for a "corking good time." But Cornelius and Barnaby can't avoid crossing paths with their boss Horace Vandergelder (Walter Matthau), who'd give them Holy Ned if he saw them in a fancy restaurant with two fancy girls instead of tending the store. Mr. Vandergelder himself is the object of Dolly's affections, though she pretends to have only a professional interest in the widowed merchant, going through the motions of finding him a new wife when in fact she'd like to be the lucky bride herself. The film's musical set pieces include a show-stopping rendition of the title number, with Louis Armstrong more or less playing himself. The biggest number is "Before the Parade Passes By," in which thousands of costumed marchers and atmosphere extras cavort before a huge replica of a New York City thoroughfare in the 1890s (actually the main entrance of the 20th Century-Fox studio, with period facades adorning the office buildings). An artifact of an era in which Broadway musicals were a significant part of popular culture, Hello Dolly seemed bizarrely irrelevant in the social turmoil of the late 1960s, and it became one of the late-1960s big-budget failures that led Hollywood studios toward a different kind of filmmaking in the 1970s. ~ Hal Erickson, Rovi

Will Ahern
as Paper Ricker/Dancer