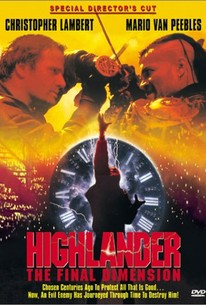 Borderline unwatchable and unspeakably dull, Highlander III is a sloppy third installment that still somehow manages to mark a slight improvement over its predecessor.

This theatrical sci-fi action tale is actually the first in a series of direct-to-video features derived from re-edited episodes of the syndicated television show Highlander (1992-1997). Adrian Paul stars as Duncan "Mac" MacLeod, kin of Connor MacLeod (Christopher Lambert), the main character from three previous Highlander features. The MacLeods are two of a race of Immortals, destined to wander the planet forever, capable of dying only by beheading and battling with swords of those of their ilk that have gone evil. Connor appears to help Mac battle Slan (Richard Moll), a fellow Immortal gone wrong, but Slan gets the best of Connor, hurling him from a bridge, leaving Mac to finish Slan off. Months later, Mac becomes involved with another Immortal, Reinhardt (Christopher Ohrt), and his girlfriend Rebecca (Vanity). Believing Reinhardt dead at Mac's hands, Rebecca seeks vengeance for her lover's death, but Mac discovers that Reinhardt, still alive, is manipulating them both. This revelation leads to a final showdown between Mac and Reinhardt. Highlander: The Gathering (1993) also introduced some of the TV series' regulars, including Mac's best friend Richie (Stan Kirsch) and girlfriend Tessa (Alexandra Van Der Noot). ~ Karl Williams, Rovi