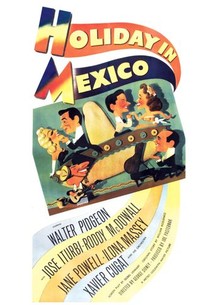 Too long by at least two reels, Holiday in Mexico is nevertheless one of the more enjoyable MGM Technicolor musicals of the 1940s. Walter Pigeon is top billed as Jeffrey Evans, American ambassador to Mexico. Captivated by the charms of her adopted homeland, Evans' impulsive daughter Christine falls in love with the decidedly mature piano virtuoso Jose Iturbi (cast as himself). Amused by Christine's ardor, Iturbi agrees with Evans that the girl would be far better off with someone closer to her own age-namely, British ambassador's son Stanley Owen (Roddy McDowell). Meanwhile, Christine plays matchmaker between her widowed father and glamorous Hungarian Toni Karpathy (Ilona Massey). Holiday in Mexico was Jane Powell's first MGM effort, and it is clear that producer Joe Pasternak intended to transform the teenaged soprano into the "new Deanna Durbin", though of course Powell eventually developed her own distinctive style. In addition to the musical contributions of stars Powell and Iturbi, the film costars the inimitable Xavier Cugat, doing his Xavier Cugat thing.

Xavier Cugat
as Himself

Jose Iturbi
as Himself

Amparo Iturbi
as Herself

Tonia Hero
as Herself

Teresa Hero
as Herself

Fidel Castro
as Extra
View All

Critic Reviews for Holiday in Mexico

Audience Reviews for Holiday in Mexico

There are no featured audience reviews for Holiday in Mexico at this time.