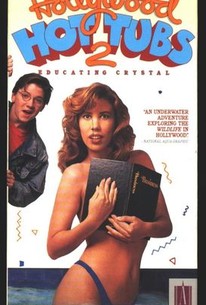 The greatness continues (or something like that) in this sequel to the racy comedy Hollywood Hot Tubs. Crystal Landers (Jewel Shepard) and her mother Pamela (Remy O'Neill) are still running their successful hot tub business, and Pamela sends Crystal to night school so she can get a degree in business. Jason (Patrick Day), one of her classmates, has mastered the art of talking, dressing, and acting like a yuppie, and he volunteers to rid Crystal of some of her Valley Girl affectations so she can move ahead in the business world. Pamela finds her heart is stolen away by Prince Ahmet (Bart Braverman), an Arab who has made a killing in the oil business, while the Prince's chauffeur, Gary (David Tiefen) has his eyes on Crystal. But Gary likes Crystal just enough to warn her that the Prince isn't all he seems to be, and he has plans to take over their hot tub business. Hollywood Hot Tubs 2: Educating Crystal also features the unforgettable closing theme "Educating Crystal Rap," performed by the memorably named hip-hop outfit Whitey Got No Soul.

There are no critic reviews yet for Hollywood Hot Tubs 2: Educating Crystal. Keep checking Rotten Tomatoes for updates!

There are no featured audience reviews for Hollywood Hot Tubs 2: Educating Crystal at this time.