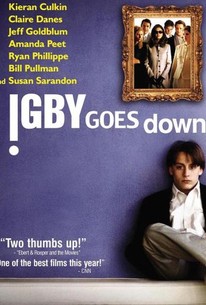 In the vein of The Catcher in the Rye, Igby Goes Down is scathingly witty and sharply observant.

Meet Igby Slocumb. He's an angry, rebellious and sarcastic seventeen-year-old at war with the stifling world of "old money" privilege into which he was born. Igby's life and family seem one way on the surface, but he's figuring out things are completely different underneath. His father, Jason, is away "recuperating from life" after a sad slide into schizophrenia. His mother, Mimi, is fierce, distant and self-absorbed, with a long-term dependency on "little peppies" to get her through the day. And his older brother, Oliver, is a shark-like young Republican on the fast track to materialism at Columbia University. All in all, Igby figures there's a better life out there, and therefore, sets out to find it. After flunking out of yet another prep school, Igby is sent to a Midwest military academy, and from there, with his mother's pilfered credit card, he goes on the lam. His darkly comedic voyage eventually leads to New York, where he hides out at his godfather's weekend pied-a-terre. Avoiding his family, Igby falls in with a host of questionable characters, including his godfather's trophy girlfriend, her flamboyant pal Russel, and the terminally bored Sookie Sapperstein. In his quest to free himself from the oppressive dysfunction of his family, and in his search to figure out what he wants for himself, Igby's struggles veer from comic to tragic in an ultimately noble attempt to keep himself from "going down."

Nicholas Wyman
as Suit
View All

News & Interviews for Igby Goes Down

Critic Reviews for Igby Goes Down

Audience Reviews for Igby Goes Down