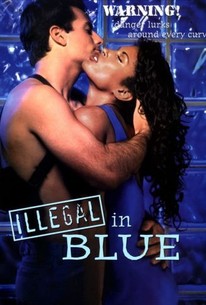 In the erotic thriller Illegal in Blue, Chris Morgan (Dan Gauthier) is a young policeman who confronts the harsh reality that he must compromise his ideals to get along in a world of moral ambiguity. When police officers split a large sum of confiscated illegal gambling money among themselves, Morgan reports it to Internal Affairs. He starts receiving death threats, and the police department suspends him without pay. Morgan begins a steamy love affair with a stunning nightclub singer, Kari Truitt (Stacey Dash), whose husband is found murdered. Morgan's suspension is lifted, and he goes back to the police department to face open hostility from officers who want him to soften his testimony against the policemen who split the gambling money. He also gets caught up in the murder investigation, where his new lover is the prime suspect, and he soon finds that he must make some difficult choices. A well-integrated musical score, moody shots of the city at night, and lyrical love scenes help to make Illegal in Blue somewhat better than many similar low-budget efforts.

Wendy Wessberg
as Receptionist
View All

Critic Reviews for Illegal in Blue

Audience Reviews for Illegal in Blue

There are no featured audience reviews for Illegal in Blue at this time.