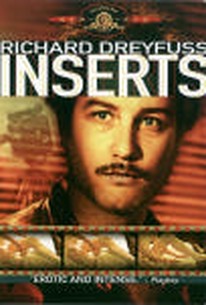 Writer/director John Byrum filmed this bizarre and controversial period picture on one massive set. It takes place in the 1930s, and stars Richard Dreyfuss as Boy Wonder, a once-great Hollywood director, who spends all of his time in decrepitude in his rococo mansion (which will soon be leveled and replaced by a major highway), half-soused, unshaven and clad in his bathrobe and pajamas. Instead of shooting major Hollywood pictures, this impotent has-been is now reduced to shooting pornographic films with a heroin-addled actress, Harlene (Veronica Cartwright) and a moronic leading man, Rex (Stephen Davies). Rex's employer, the financier Big Mac (Bob Hoskins) turns up, bringing along his shy and dim-bulb fiancee, Cathy Cake (Jessica Harper), whom he treats condescendingly but hopes to launch to megastardom as a movie actress. When Harlene overdoses, Rex and Big Mac haggle over her body. Mac then leaves Cathy with Boy Wonder, who tells the burned-out director that her one dream in life is to appear in movies, and asks if she could pose for insert shots for his next stag film. By shooting the inserts, Boy Wonder manages to regain his potency, but he is completely put off by Cathy, who suddenly realizes, after the fact, that the camera wasn't running. At that point, Big Mac returns and catches them in the filmmaking process. Although he is not really sure what went on, Big Mac vamooses with Boy Wonder's camera and paraphernalia and takes Cathy with him. Meanwhile, an aspiring thesp named Clark Gable turns up at the door, wanting Boy Wonder to direct him. The film's raunchy prologue (set in a present day screening room) features an uncredited vocal cameo by an actor who rocketed to A-list Hollywood stardom in the 1980s. ~ Paul Brenner, Rovi