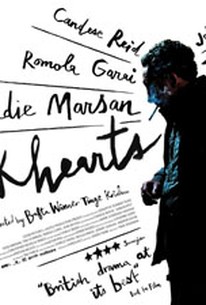 A handful of lost souls turn to alcohol and drugs to cope with their emotional agony in this powerful British drama. Frank (Eddie Marsan) is a middle-aged man whose years in the military have left him with a war raging inside his mind. Frank drinks heavily to blot out his Post Traumatic Stress Disorder, and one day he sees a homeless teenage girl, Lynette (Candese Reid), being accosted outside the liquor store he frequents. Troubled by her circumstances, Frank buys Lynette some food and later offers to let her sleep at his shabby apartment. The two soon strike up a friendship, but Lynette's drug addiction makes her difficult to live with, as does her relationship with her short-tempered boyfriend Danny (Tom Sturridge). Meanwhile, Christine (Romola Garai) looks like a happy and successful woman on the surface, but while she has a respectable career in business, her life as a single mother has filled her with guilt and loneliness, and she turns to drugs and sex to fill the emotional void. Junkhearts was the first feature film from director Tinge Krishnan.

Chris Coghill
as Banker
View All

There are no featured audience reviews for Junkhearts at this time.