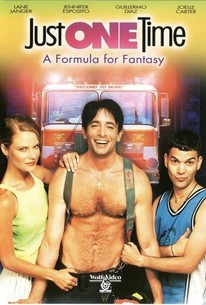 Producer-turned-director Lane Janger also stars in this sexual comedy of manners about a woman who turns her groom-to-be's sapphic fantasies back on him. Just a few weeks before he's due to be married, fireman Anthony (Janger) decides that it's now-or-never time for his fantasy of making love to his fiancée, Amy (Joelle Carter), and another woman at the same time. Although she has repeatedly rejected such a scenario, this time an angry Amy agrees -- as long as Anthony will make love with her and another man at the same time. Soon, the couple find themselves going on "dates" outside their relationship. Anthony grudgingly allows Victor (Guillermo Diaz), a closeted, inexperienced college student who's had a crush on him since high school, to hang out with him and his firehouse cronies, hoping all the while that Amy will call his bluff. Amy, meanwhile, befriends Victor's pal Michelle (Jennifer Esposito), a lesbian furniture maker recovering from a recent breakup. Anthony's fellow firefighters adjust surprisingly well to their colleague's new friend, but problems ensue when Amy's expatriate parents show up early for the wedding, interrupting their daughter's tentative experimentation. Just One Time began its life as an eight-minute short that premiered at the 1998 Sundance Film Festival; it was screened with the feature Ma Vie En Rose during that film's Canadian theatrical run and was later included in the collection Boy's Life 3. Principals Esposito, Carter, and Diaz reprise their roles from the short, while Janger shares screenwriting duties with Columbia film school alumna Jennifer Vandever in a novel arrangement that allowed them to collaborate on the first act and then split up, with his scribing the second act and her the third.

Pat Moya
as Mona
View All

Critic Reviews for Just One Time

Audience Reviews for Just One Time

There are no featured audience reviews for Just One Time at this time.