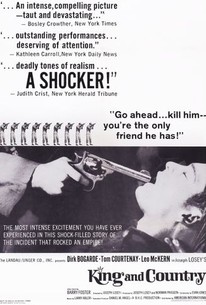 King and Country was adapted by Evan Jones from John Wilson's play Hamp. Misfit World War I British soldier Tom Courtenay, on trial for desertion, is defended by martinet officer Dirk Bogarde. Disgusted by the assignment, Bogarde wearily asks the dullwitted Courtenay the reasons for his actions. Courtenay replies that, after being the sole survivor of a battle and discovering that his wife had been cheating on him while he was serving his country, he didn't see any purpose in going on; thus, he "went for a little walk". Bogarde's dislike of his client melts into sympathy, which in turn leads to temporary indignation over the manner in which the average enlisted man is treated by his aristocratic superiors. Despite his pleas for leniency, Bogarde's client is sentenced to be shot; after all, an example must be made. On the day of the execution, the men on the firing squad are so drunk that they're unable to carry out the sentence. Once more incensed by the "rabble" that he's forced to deal with, Bogarde takes the law into his own hands. ~ Hal Erickson, Rovi

Keith Buckley
as Corporal of the Guard

Derek Partridge
as Captain at Court-Martial

Brian Tipping
as Lieutenant at Court-Martial

Terry Palmer
as Soldiers in Hamp's Platoon
View All

Critic Reviews for King and Country

Audience Reviews for King and Country

There are no featured audience reviews for King and Country at this time.