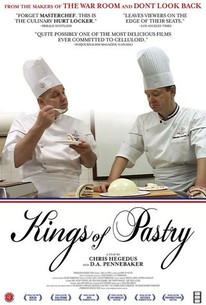 Film Forum is pleased to present the U.S. theatrical premiere of KINGS OF PASTRY, by legendary documentary filmmaking team, D.A. Pennebaker and Chris Hegedus (DONT LOOK BACK, MONTEREY POP, THE WAR ROOM), opening September 15. Sixteen contenders seek the Meilleurs Ouvriers de France ("MOF"), France's highest honor in the sublime art of patisserie, employing vast amounts of sugar, butter and eggs - not to mention adrenaline - to create gorgeous, fantastical, delicious creations. Some of the world's most accomplished chefs gather in Lyon for three intense days of mixing, piping and sculpting everything from delicate chocolates and elaborate cream puffs to six-foot-high sugar sculptures. D. A. Pennebaker and Chris Hegedus secured exclusive access to shoot this never-before-filmed event. They follow chef Jacquy Pfeiffer, co-founder of Chicago's French Pastry School, as he journeys to his childhood home of Alsace to practice for the contest. During the competition itself, chefs work under constant scrutiny by master judges and their critical palates. These pastry marathoners race to deliver their creations (including extraordinarily fragile sugar sculptures) without shattering them. It's a suspenseful quest for artistic perfection - brimming with passion, sacrifice, disappointment, and joy - to become one of the KINGS OF PASTRY. -- (C) Film Forum

News & Interviews for Kings of Pastry

Critics Consensus: Easy A and The Town Are Certified Fresh
View All

Critic Reviews for Kings of Pastry

Audience Reviews for Kings of Pastry