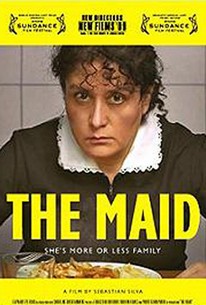 Catalina Saavedra's devastating performance would be reason enough to see The Maid, but Sebastian Silva's empathetic direction and finely tuned script only add to the movie's pleasing heft.

A woman feels she must fight to hold on to her place in the household where she's been a servant for much of her life in this drama from writer and director Sebastian Silva. Raquel (Catalina Saavedra) works as a maid for a well-to-do Chilean family, and has been with the household so long that she's come to think of herself as part of the family. However, Raquel is also aware of the distance between herself and her employers, and though she's fiercely devoted to Mundo Valdes (Alejandro Goic), his wife, Pilar (Claudia Celedón), and their son, Lucas (Agustín Silva), she finds herself increasingly at odds with their rebellious daughter, Camila (Andrea García-Huidobro). Years of hard and unrelenting work have begun to take their toll on Raquel, and Mundo decides she could use some help; he hires a young au pair, Mercedes (Mercedes Villanueva), to assist her, but Raquel refuses to allow anyone to usurp her role in any way, and treats the girl so horribly she soon quits. Unaware of the conflict between Raquel and Mercedes, Mundo hires an older and more experienced women to work with Raquel, Sonia (Anita Reeves), and it's not long before the two domestics are locked in a fierce battle of wills. La Nana (aka The Maid) received its American premiere at the 2009 Sundance Film Festival. ~ Mark Deming, Rovi

Critics Consensus: Where the Wild Things Are Is A Wild Rumpus
View All