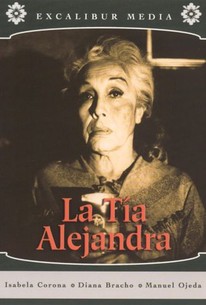 A middle-class family makes room for an elderly houseguest, only to discover her presence opens the door for evil in this atmospheric tale of terror. Aunt Alejandra (Isabela Corona) is an elderly woman who relocates to Mexico City and informs her nephew that she's moving in with him. The nephew agrees, despite the fact he and his family are struggling financially and Alejandra is well off enough to easily support herself. Relations between Aunt Alejandra and the family soon become strained, but no one in the family is aware of her secret -- she's a witch and soon uses her powers to take revenge against the children of the household. As the mother and father find their lives torn apart by the death of three of their children, they discover that their youngest daughter seems to have learned a few tricks from her aunt. La Tia Alejandra was directed by noted Mexican producer/director Arturo Ripstein, whose previous terror films have included Profundo Carmesí and El Castillo de la Pureza.

There are no critic reviews yet for La tia Alejandra. Keep checking Rotten Tomatoes for updates!

There are no featured audience reviews for La tia Alejandra at this time.