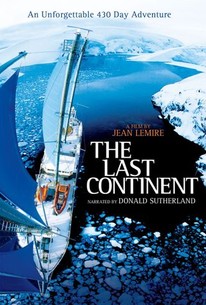 The land-mass of the title, of course, refers to Antarctica, and in referencing the finality of it, the directors are referring to its status as the last "unconquered" continent, and the last to be receive full exploration. The crew at the heart of this film - a cadre of scientists, documentarists and boatmen - hit the Antarctic waters in a seabound vessel for 430 days, to evaluate the impact of global warming on the ecosphere. As the voyage unfolds, danger and risk abound; at one point flattening winds surface and threaten to end the lives of all aboard by breaking the ship apart on nearby rocks. Meanwhile, the stated impact of gradual warming on local fauna becomes utterly and readily apparent as the voyagers note that ice floes typically used by seals as a locale to birth calves are now absent, the warm temperatures unable to sustain them. As winter sets in, the film hones in on fabulous, breathtaking marine life thriving beneath the subthermal ice - which provides yet another reflection on the devastation that will occur if the drastic climate change continues to transpire. This film represents an unofficial companion piece to director Jean Lemire's documentary The White Planet, in which he films the environment and its inhabitants in the area ensconcing the South Pole. ~ Nathan Southern, Rovi

There are no featured audience reviews for Last Continent at this time.