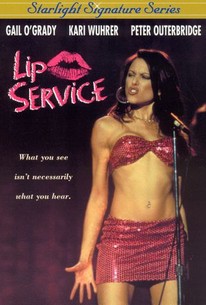 What's a music biz insider to do when a beautiful girl turns out to have an ugly voice? Roger Deacon (Peter Outerbridge) is a once-successful record producer whose career hit the skids after he let a number of bad habits get the better of him. The head of a major record label offers Roger a chance to pull his career out of the doldrums by producing an album for Sunni (Kari Wuhrer), a sexy would-be pop goddess who happens to be the label chief's girlfriend. There's one little problem, though -- Sunni can't sing to save her life, and no amount of studio trickery at Roger's disposal is able to conceal that fact. One night, after a failed session with Sunni, Roger ends up at a bar on karaoke night, and he hears Maggie Stanley (Gail O'Grady), a housewife, sing a number. Roger is struck by the fact that Maggie has the perfect voice for the material he's trying to cut with Sunni, and faster than you can say Milli Vanilli, he convinces Maggie to sing for Sunni, despite her natural shyness and stage fright. However, when Sunni discovers she's been reduced to a lip sync act for her upcoming video and concert tour, she's none too happy, and shares her displeasure with her boyfriend; Roger, meanwhile, is wrestling with the fact that he's fallen in love with Maggie, who is married and not prepared to leave her husband. Also shown under the title Out of Sync, Lip Service was produced for (and originally aired on) the VH1 cable music network.

There are no critic reviews yet for Lip Service. Keep checking Rotten Tomatoes for updates!

There are no featured audience reviews for Lip Service at this time.