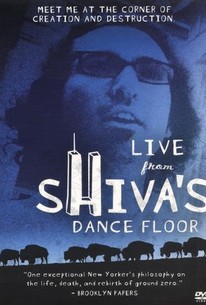 Timothy "Speed" Levitch is a poet, performance artist, and offbeat tour guide who was the subject of the 1998 documentary The Cruise, in which he attempted to explain his philosophy of how life is largely a matter of celebrating the events going on around you. In Live From Shiva's Dance Floor, Levitch puts his own ideals to the test as the longtime New Yorker tours the former site of the World Trade Center with filmmaker Richard Linklater and a camera crew in tow. Levitch shares his thoughts on post-9/11 New York, what he learned from the aftermath of the terrorist attacks, and how he feels the city should memorialize Ground Zero.

There are no critic reviews yet for Live From Shiva's Dance Floor. Keep checking Rotten Tomatoes for updates!

There are no featured audience reviews for Live From Shiva's Dance Floor at this time.