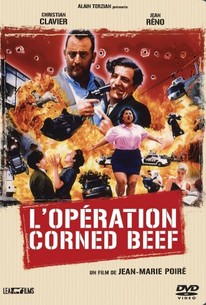 In this farcical spoof of spy thrillers, set in France, few obvious or old jokes are left untold, especially if they are at the expense of overweight women, the handicapped, or dogs who don't know where to defecate. The story itself concerns the unsanctioned efforts of a covert unit to gather evidence about illegal arms shipments with the unwitting help of an embassy employee. When it appears that she is about to ruin everything by getting married on a weekend which is important to their operation, project director La Squale (the Shark) (Jean Reno) directs that someone must seduce the woman's fiance so that she'll call off the weekend. Little does he know that the woman chosen is his own girlfriend -- the only one of his agents who is sufficiently thin to be alluring. One thing after another leads to the near failure of the operation -- including the efforts of the repentant fiance (Christian Clavier) to win his girlfriend back. ~ Clarke Fountain, Rovi

Jacques Sereys
as Minister of defense
View All

There are no critic reviews yet for L'Operation Corned-Beef. Keep checking Rotten Tomatoes for updates!

There are no featured audience reviews for L'Operation Corned-Beef at this time.